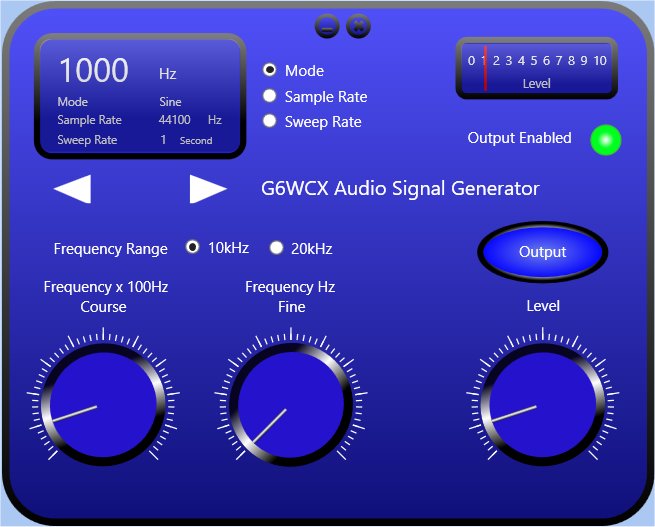 This project was developed using WPF and C#. The Signal Generator covers the audio spectrum between 1Hz and 20kHz the quality of the signal it produces depends on the bandwidth of the sound channel on the computer its installed on. The current version is 1.00  The program has been compiled to run on Windows 7 or higher with .Net 4.5 assembly installed.

Typical specification for the headphone output is :-

The signal generator produces sine, square, triangular, sawtooth waves and pink and white noise. The quality of the square, triangular and sawtooth waveform depends on the actual bandwidth of the audio channel of the computer being used and has been limited to 5kHz. It was shown in tests that signals above ~7kHz tended towards sinewaves. The generator produced a clean sinewave upto 20kHz

Generation of the signals

To generate the signals requires them to be defined mathematically and then sampled over time. The equations used to produce the signals are as follows :-


where b = 0.46 and calibrates the maximum frequency and c = sweep time in seconds

Because this version of the signal generator is a single channel the phase term can be put to 0 and therefore ignored.

The method used to generate the signals is to produce a wave in file in memory and loop over it to give a continuous signal. The wave file consists of header information and PCM data representing the waveform to be played.

The default sample rate used is 44100 samples per second and encoded into 16 bit samples. The specification for 16 bit samples states the samples shall be signed integers and vary between -32,768 to 32,767. The wave file data format is a PCM(Pulse Code Modulation). This can be generated using a for loop to build the data eg:-

// Setup a new memory stream to write binary data to

The program has been built using the Windows Presentation Foundation C# and XAML using Microsoft Blend 2015. The signal generator engine code is the same code I wrote for the WinForms version of the signal generator.

The controls have been written into a custom control library called CustomControlLibrary.dll. The controls in the library are an LCD display, Knob, Panel Meter, LED, and a Switch.

The signal generator program lets you select a frequency between 1Hz and 20kHz sinewave in two ranges and Sweep across the frequency range. The upper frequency limit for the square, triangular and sawtooth waves is 5kHz. It will also generates Pink and White Noise and allows you to adjust the level of the output signal.

The selected options for the signal generator are displayed on the LCD and can be adjusted using the buttons to the right of the LCD and the selection buttons below the LCD can be used to scan through options.

You can select one of the two frequency ranges using the frequency range buttons. The two ranges are 10kHz or 20kHz. The 20kHz range disables the square, triangular and sawtooth waveforms.

The wave shape can be changed from sine, square, triangular, sawtooth and white and pink noise and sweep mode by selecting Mode in the option buttons and using the selection buttons below the LCD.

You can select a different sample rate by selecting Sample Rate in the option buttons and using the selection buttons below the LCD. When changing the sample rate select one which is at lease twice the highest frequency you want to use. Choosing a higher sample rate will improve the jitter on the square, and sawtooth waveforms. You will not be able to change the sample rate when you have selected pink noise or the sweep option.

The sweep function will sweep between 1Hz and 20kHz

The sweep time can set between 1 and 5 second by selecting Sweep Rate in the option buttons and using the selection buttons below the LCD.

Every time you change frequency, wave shape, sample rate or sweep time a new waveform is written into memory.

You can change the amplitude of the waveform with the level control the maximum will be around 2Vrms depending on the load you are driving. Note you should not connect a load < 25ohms to you headphone socket it could damage your computer.

Paul Kellet for development of the Pink Noise Filter